What is and how it’s born

As for the recognition to coach A and B, the same is assigned to the coach who during the season has distinguished himself most for sportsmanship, preparation, class, elegance, way of dealing with the media and ability to relate to his team than to professional skills combine those human and sporting qualities. All qualities that have distinguished Manlio Scopigno during his brilliant career and have made him unique in the panorama of national coaches. 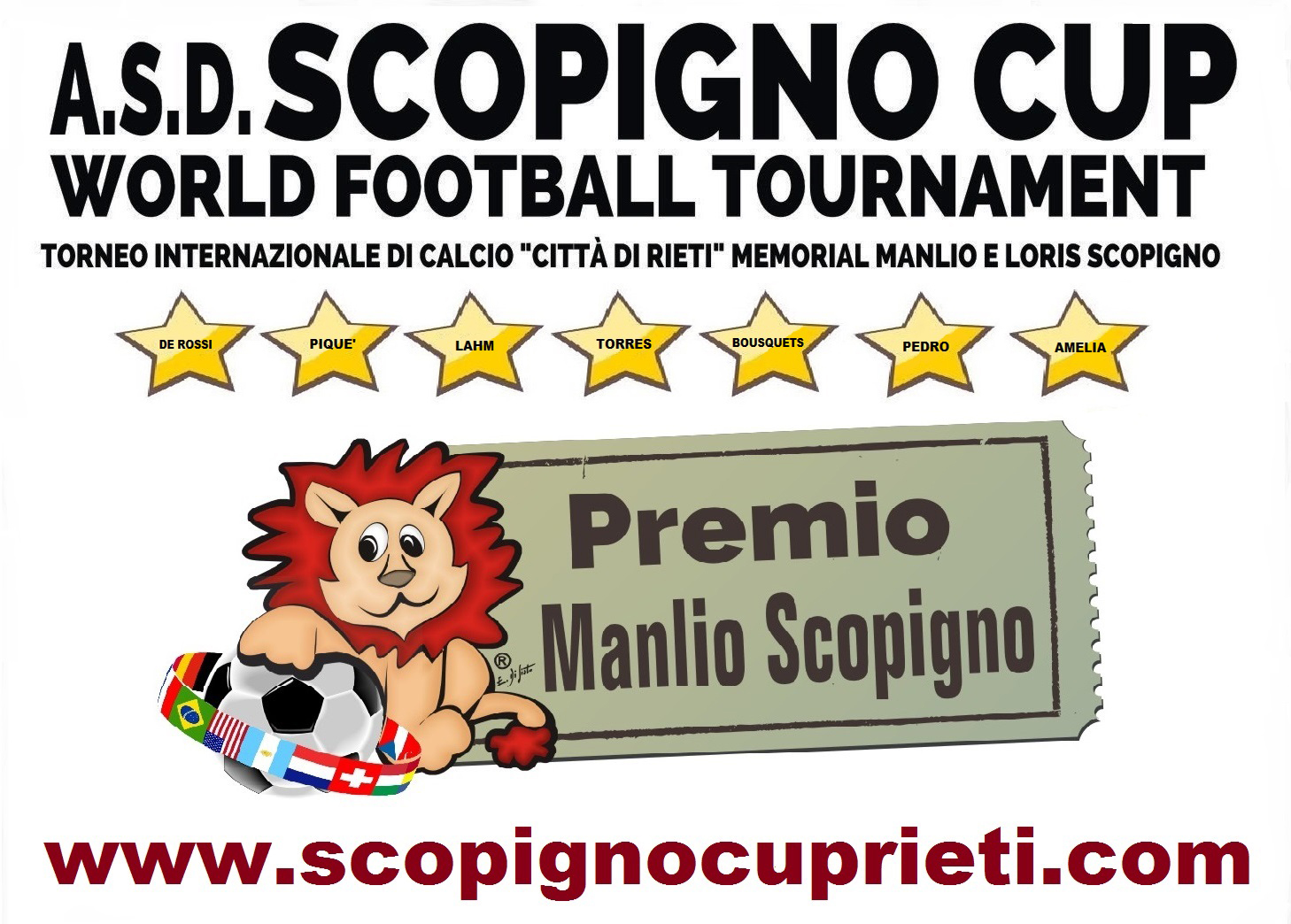 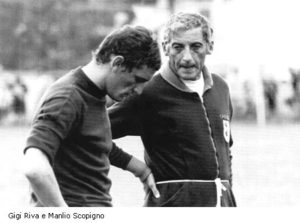 Manlio Scopigno accidentally born in the province of Udine, a Paulara, November 20, 1925. Soon, however, the family, the father worked in the body of the Forest Guard, moved to Rieti and the Lazio Manlio in the capital will be formed as a man and as sports. The Lazio town Manlio will remain forever linked. Rieti will always be a point of reference when moving the sporting life imposes. A kind of refuge and rest one can not just give wrong Even St. Francis decided to stay longer here.
In Rieti, especially, Manlio meets the woman of his life: Angela. In Rieti, in the years of his football successes, he flees to embrace the fratrello Loris (figure as important sports Rieti, former footballer and manager of CONI) and find old friends.
The young Scopigno studied and played profitably in both fields. Speaking from football formed in Rieti, then militant in series C. It ‘a quarterback with an elegant gait, not a snarling cur guard as most of the defenders of those years. The foot of the young is soft, when it moves not trample the grass, caresses, his stride cuts the air and off the head when it seems as light as a dancer. Some remember the legendary Maroso, hero of the great Torino.
They are hard years, years of war. After the war, Manlio became a man and has changed its name to Vaccarezza Rieti Rieti in Serie B. After a few seasons, his name ends up on the notebook’s top teams as Salernitana.
In Campania dispute three brilliant seasons, so good to be noticed by the expert eye of former world champion Monzeglio, which makes buying from Naples. It looks like the turning point in his career. The misfortune, however, is lurking: a terrible accident ends his adventure player.
Manlio is at a crossroads: continue university studies or try to live football. The ball has the better. Earlier some bench in the lower divisions, then the turning point. Knows Lerici, coach of Lanerossi Vicenza, a coaching course. The two become friends and Lerici asks him to be his second in Veneto. Manlio eagerly agrees, it will be her luck. After a few seasons Lerici was sacked and advises executives to put their trust in his friend. The trust will be well placed: the red and white will become the queen of the province. So many beautiful championships with the launch of interesting guys (Savoini Bell Vastola) and the recovery of old samples (Vinicio all). Manlio open the doors of Bologna. It will be an unlucky season, it finished with a waiver. Never mind, he calls the Cagliari. In Sardinia Scopigno builds the masterpiece of his career continues the work of his predecessor and Silvestri leads the Cagliari, in a few years, the historic championship in 1970. We speak of Cagliari of Gigi Riva, Cera, of Greatti, of Albertosi, Niccolai, Nene and Domenghini, one of the teams most beautiful that the history of our football can remember.
After the triumphs of Cagliari will be dark years: the Roma, returning to Vicenza and disease. Manlio leaves us too early on September 25, 1993.
Calcium forget in a shamefully him. Dedicate a stadium, as is now the town of Rieti, it is one of the best ways to remember this great man. Scopigno was a maverick, a man do with his aloof, with his irony and intelligence, has ennobled football, easing some tensions that, unfortunately, feeding the sport most loved by Italians.
Remember, dear Manlius, it is just a small way to say thank you for everything you have done for “your Rieti” and for the national sport.

“… The cleanest in football is the ball, when it does not rain”

“… Football is a castle whose foundations are the lies. I say a spade a spade and to nag and nag step to a weird guy. Everyone else, from magician to magician Helenio Turi through the ascetic Heriberto, They are regular types”

“During a tour in the USA, while the transfer market sees Inter, Juve and Milan unleashed in pursuit of Riva, between the two comes the break. On returning the call to President Rocca Scopigno to tell the exemption. The” philosopher “replies in his own way: – “President Rocca, hurry up, I have the soup to the table and I would not get cold …”

One night, a messenger of the President Golgoni the delivery of a ticket dismissal, he read it and, without moving his eyebrow whispered comment “There are two syntax errors and a subjunctive wrong”

Pierluigi Cera once told: “Scopigno had just arrived. We were in retreat for a round of the Italian Cup and in seven or eight, in spite of the rules, we had arranged to meet in a room to play poker. We smoked all we played cards on the beds. There was also a few bottles that there had to be. All of a sudden the door opens is Scopigno. Oh God, I think, now kills us (Silvestri would not), if it goes well we leverage the skin and There is squeezed in a fine! Scopigno entered, in the smoke and in the silence of the rest of us have been waiting the storm, took a chair, sat down next to us and said, pulling out a pack of cigarettes: “Do mind if I smoke? “- In half an hour we were all in bed and the next day we won 3-0”

“That was a kick-coaches sorcerers, between the prophet (Helenio Herrera, Pesaola) and the ascetic (Heriberto), between witches (Pugliese) and the character of the commedia dell’arte (” Paron “Rocco); Scopigno not is certainly framed in a stereotype among them, they define the “philosopher” for its refined culture and the apparent disenchantment with which observes football, for art to play down the events. Footballer unlucky to Naples, where closes early career for a serious injury, as a coach in Serie A did well in Vicenza, where he led the team in sixth place result improved then only in Paul Rossi. In that team and the famous Vinicius also played the lawyer Bell founder Union players”

“Scopigno is the opposite of the caricature figure of the coach-magician in vogue in those days. For he does not count very strict observance of the withdrawal and chastity, the maniacal control diets and workloads, punctuality in going to bed at nine”

They said to him

“… In Cagliari he was exercising the Socratic philosophical irony. He had great psychological insights from the great pedagogue extolling the monster of courage and bravery that was Gigi Riva”
Gianni Brera

“Scopigno is a technician who was ahead of its time. Years ago managed to turn psychologically our league”
Giulio Cesare Turrini

“Scopigno knows football better than many others, could be the national coach, he is better suited to an environment that gravitate around a team of rank”
Carlo Grandin

One night, a messenger of President Goldoni the delivery of a ticket dismissal, he read it and, without moving an eyebrow, whispered his comment
“There are two syntax errors and a subjunctive wrong”
“… Beautiful were the championships in which coach was Scopigno, he gave me of her. I said before the game:” Bell, her play on the left wing and do what she wants. “Those were years when he wanted to play football really fun to say, even at the level of “A” series. Once we had to take the field in Turin against Juventus great. We players, given the large difference in values between the two teams in the field, in the years when the psychological subjection of referees to the “big” … was “stronger” than now, took the trip as a trip: it was a few minutes to kick-off in the locker room and did spree. Scopigno came in and said: “Boys, look for less of ricomporvi and play with dignity! “he ended up that we won three to two …”
Sergio Campana

“I have no direct knowledge of football Rieti but some of its” product “more important: Manlio Scopigno. The Philosopher’s Ball by definition, column B of Rieti in sixty years ago, I often spoke of his team, especially highlighting nostalgia his land. It was 1965, Scopigno had taken over the Bologna by another great champion Lazio, Fulvio Bernardini, and unlike Dr. Tread loved to stay up late with a fine whiskey or a Fernet. Looking back on those nights, those talk, I feel to suggest the new leaders of Rieti a conference dedicated to Scopigno own, his “philosophy”, his idea of football. The guest of honor, the author, along with Manlius, the league of Cagliari: Gigi shore. About values of football”
Italo Cucci 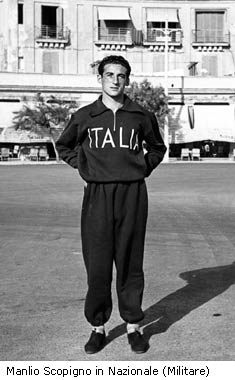 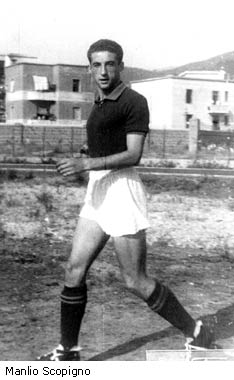 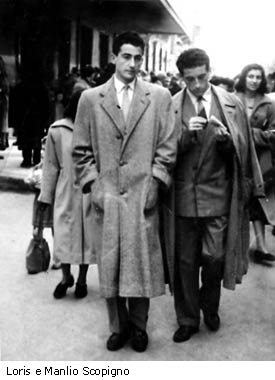 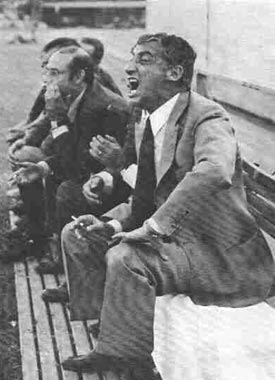