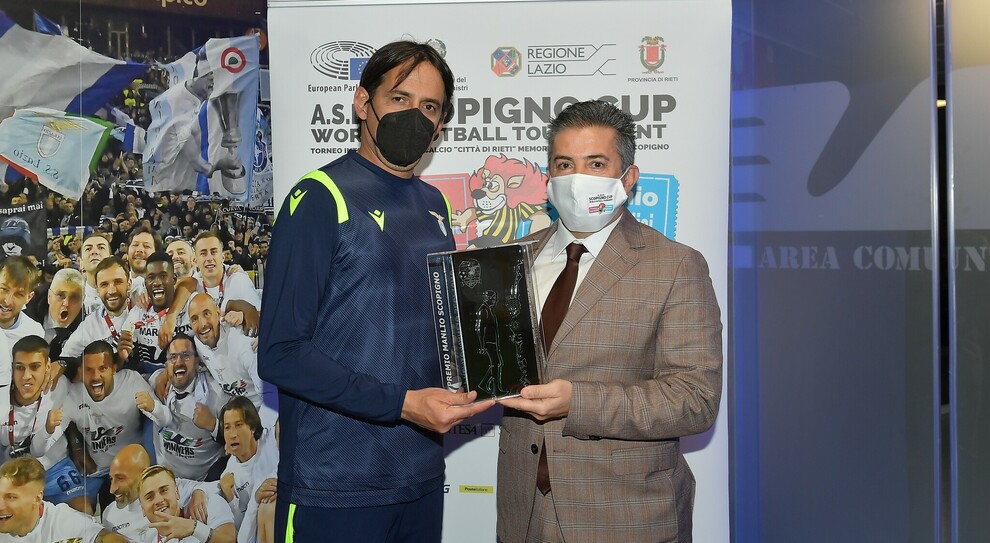 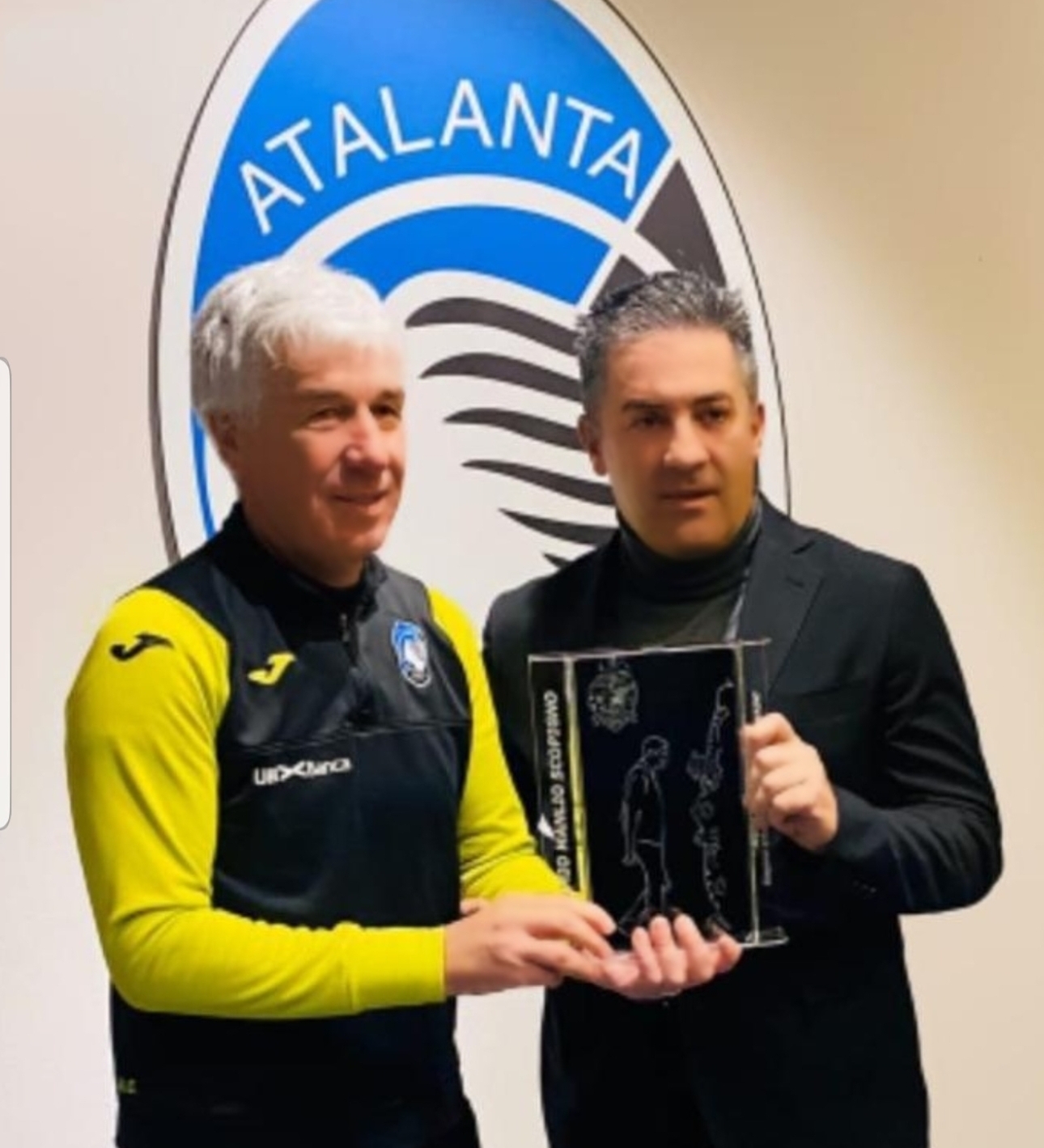 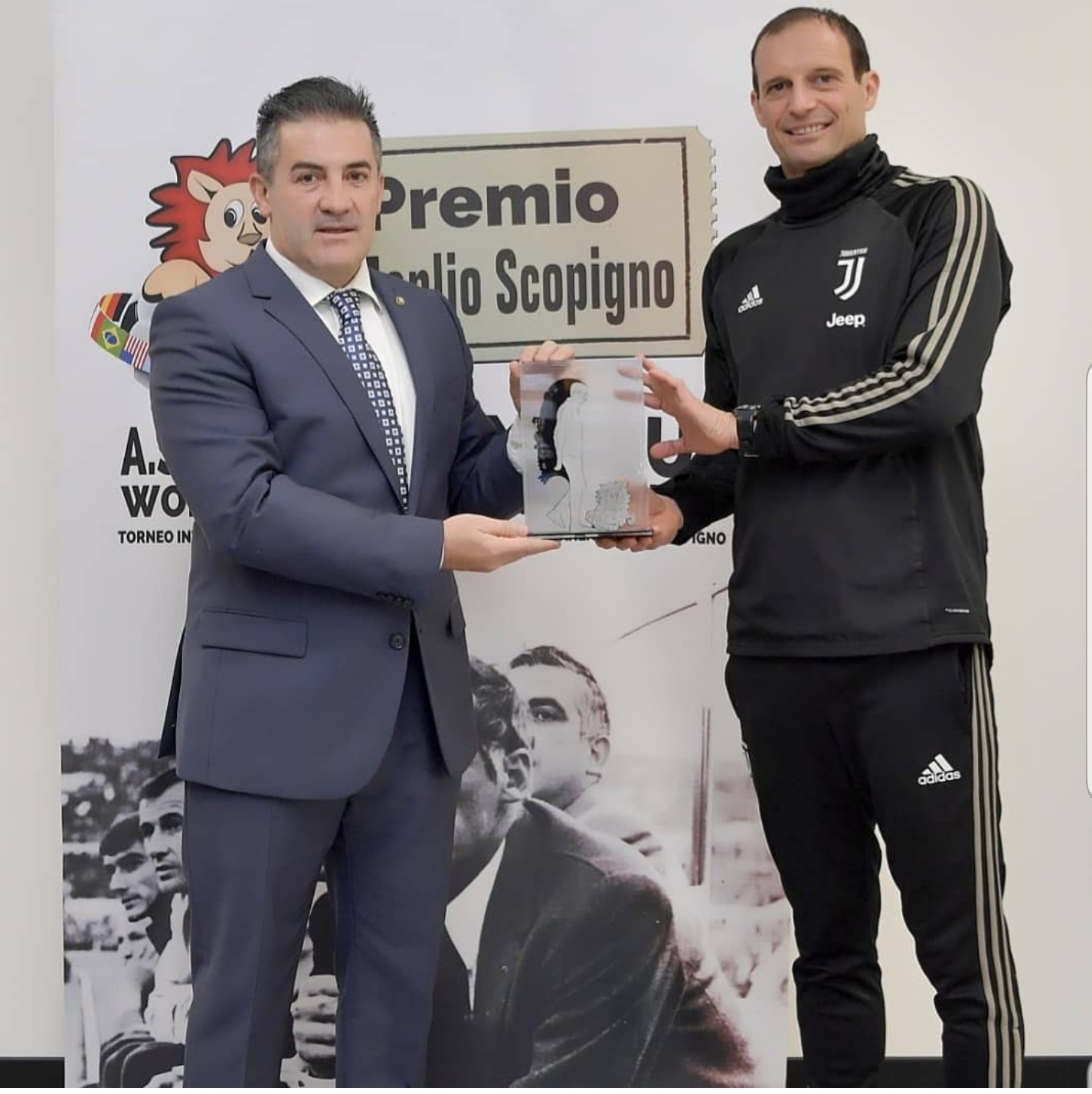 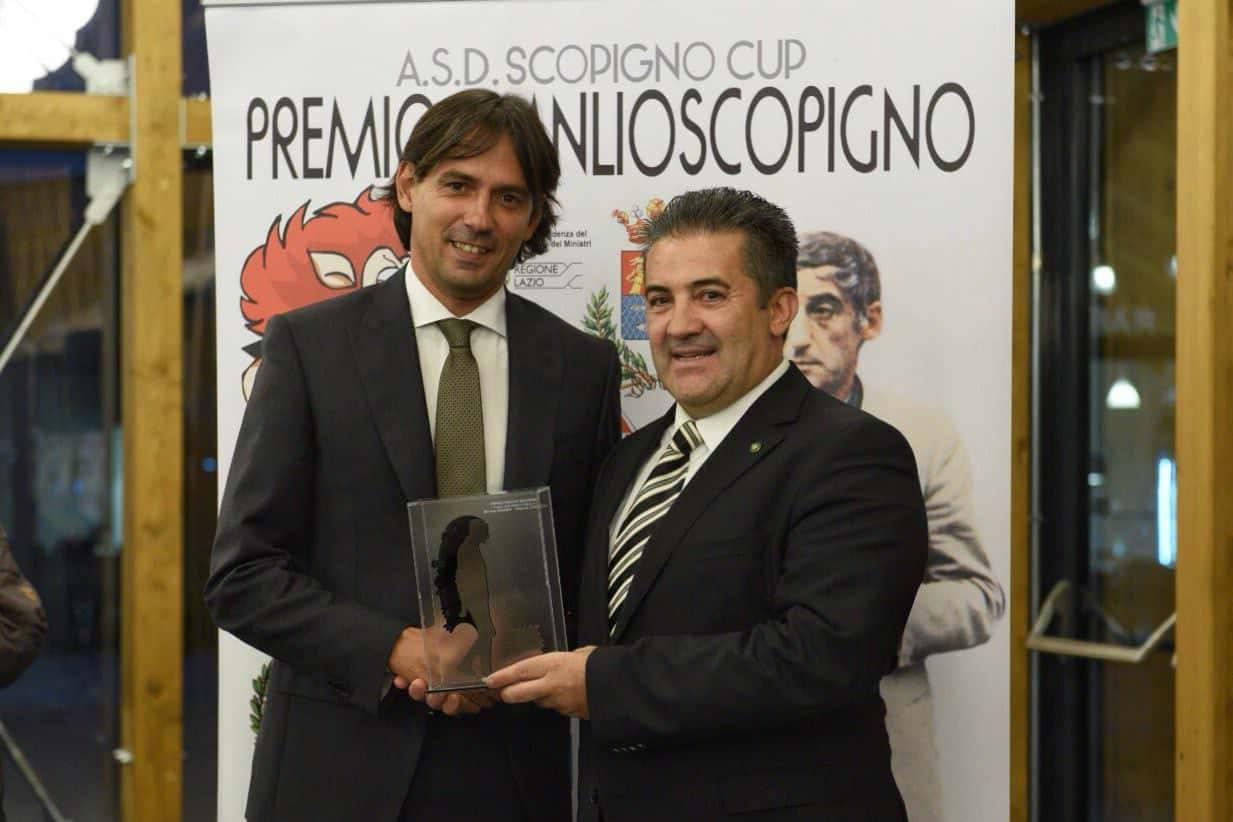 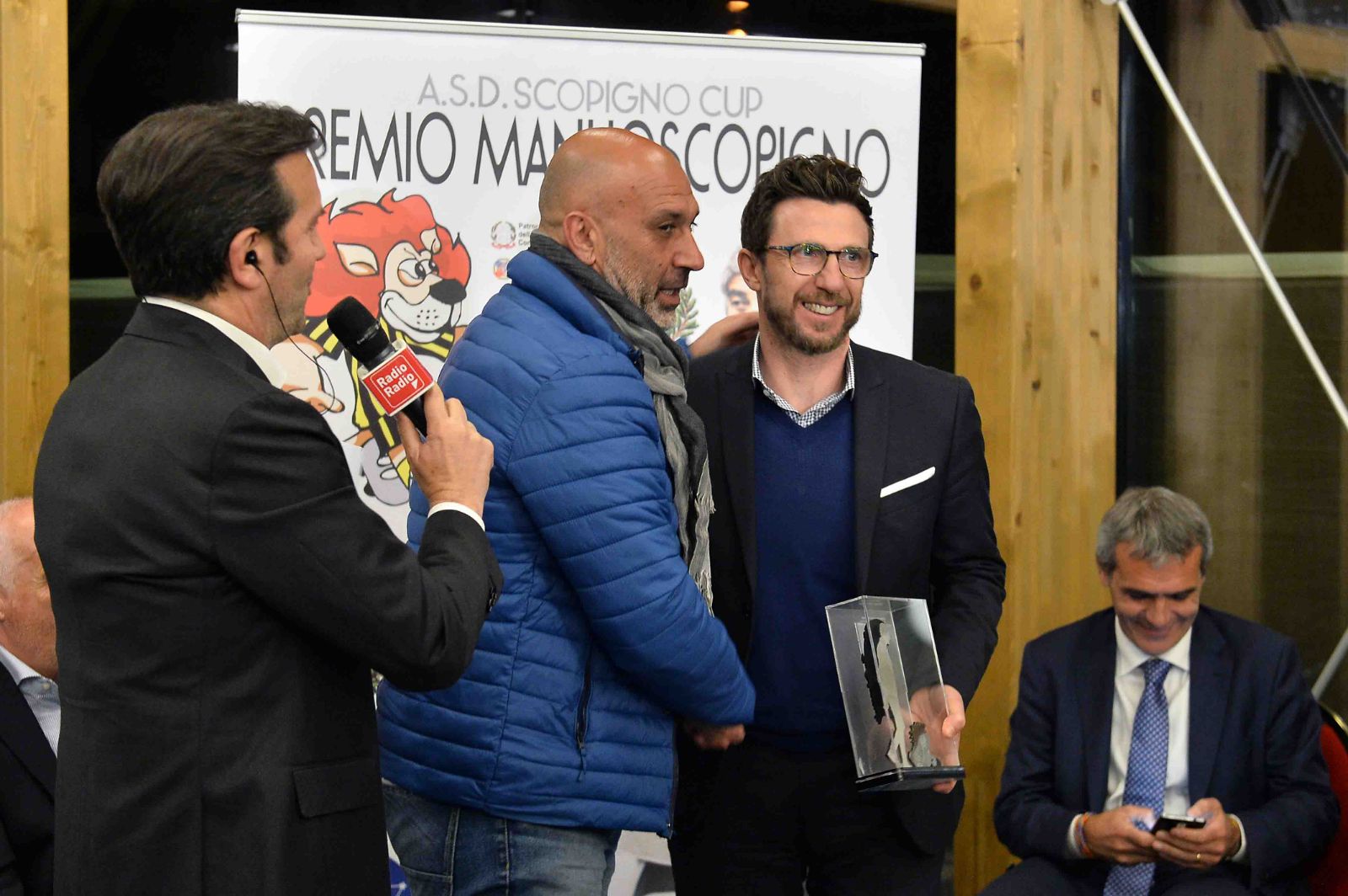 Reason: For proposing a modern and European football cultivating young talent for the Italian context 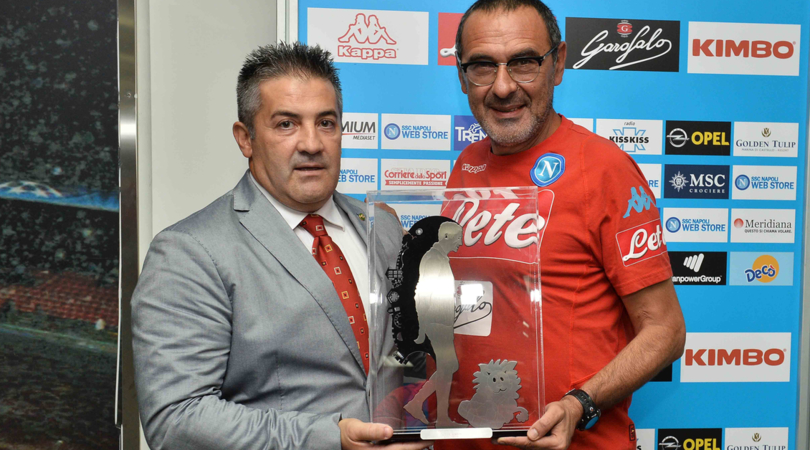 Reason: His career is proof of how nothing is impossible as long as we like. From bank employee to architect of the historic return to Empoli, after climbing one by one the steps that led him in the most important tournament of A starting from the amateurs of Be, the first team that he coached, never give up. Sacrifice, commitment, work, development of young: Sarri was a symbol of the Tuscan club, authentic model of organization and ability to discover talent. As Manlio Scopigno with its players established a human relationship privileged that leads him to be at the service of the group with dedication and conviction. 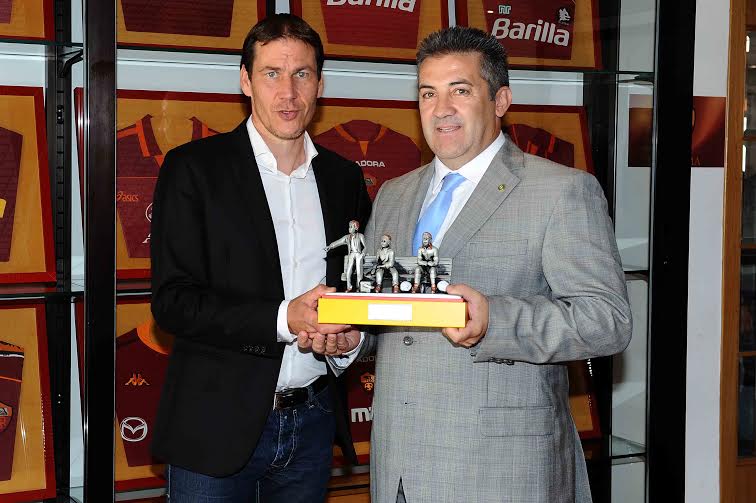 Reason: Absolute novice in Serie A in the 2013-2014 season, has relaunched the Roma at the top thanks to a spectacular game and fun, contending the Scudetto to Juventus, the protagonist of a revolution like never before and Italian champion with 102 points. Garcia reported the Roma in the Champions League and deserves Scopigno Prize for his skill, and his ability to dive with great professionalism from the start in the reality of Italian football. 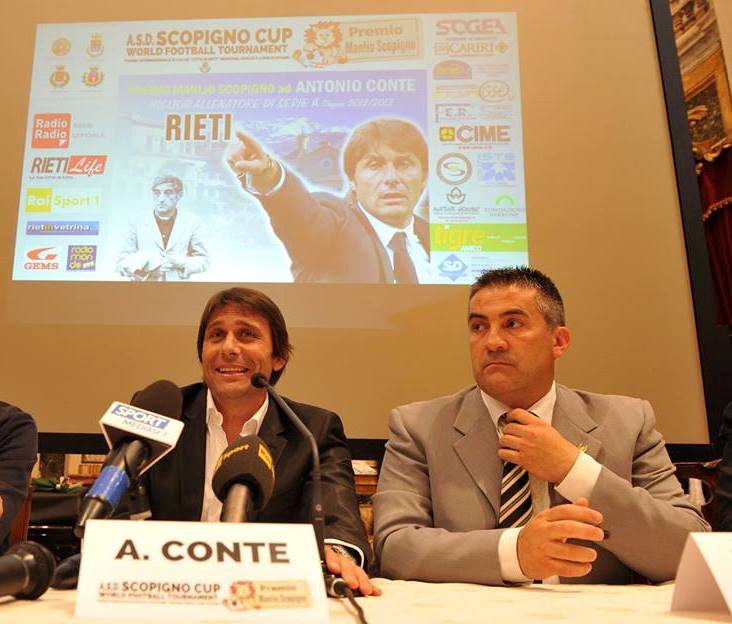 Reason: To win two consecutive championships; for bringing Juventus among the top eight teams in the European Champions League after a long wait seven years; to have returned by the millions of fans the pride of belonging to society more scudettata of Italy; to be a free spirit and non-conformist as Manlio Scopigno deserved to repeat the success in 2011 as the best coach of Serie B at the helm of Siena 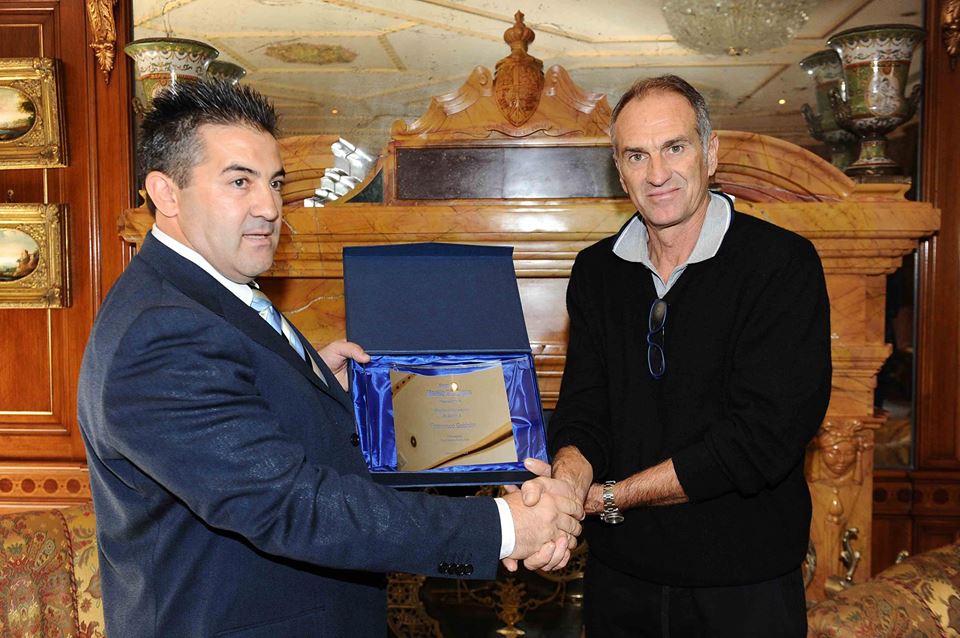 Reason: The jury decided to award the prize Manlio Scopigno 2011/2012 as the best coach in Serie A with Udinese coach Francesco Guidolin, for the excellent results achieved last season which allowed Udinese for the second consecutive year during his leadership, to gain access to deservedly ‘UEFA Champions League, thanks to an innovative and brilliant game and never speculate; thanks to which he managed to bring out and highlight the characteristics of their team. Award Manlio Scopigno well as the results obtained during the racing season, is assigned to the coach during the season is more distinct for sportsmanship, preparation, elegance, way of being with the media and ability to relate to their team skills that the jury found in its entirety in the coach from Castelfranco Veneto. 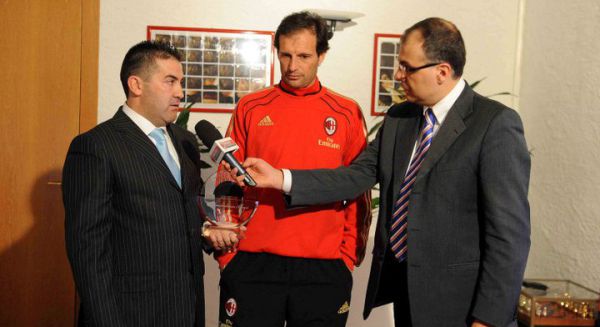 Reason: For the 2011 season, the choice fell on the Milan coach Massimiliano Allegri .The jury of journalists decided to award Mr. Allegri not only for the brilliant results achieved this season but for his still young career, as a growing Rossini, quickly brought the coach from Livorno from series to series C A. This award aims to reward the beautiful game delivered by teams of Allegri but also its great distinction that leads him to stay away from too much controversy that daily burn our football.

Reason: For the 2010 season, the choice fell on the Milan coach Massimiliano Allegri .The jury of journalists decided to award Mr. Allegri not only for the brilliant results achieved this season but for his still young career, as a growing Rossini, quickly brought the coach from Livorno from series to series C A. This award aims to reward the beautiful game delivered by teams of Allegri but also its great distinction that leads him to stay away from too much controversy that daily burn our football. 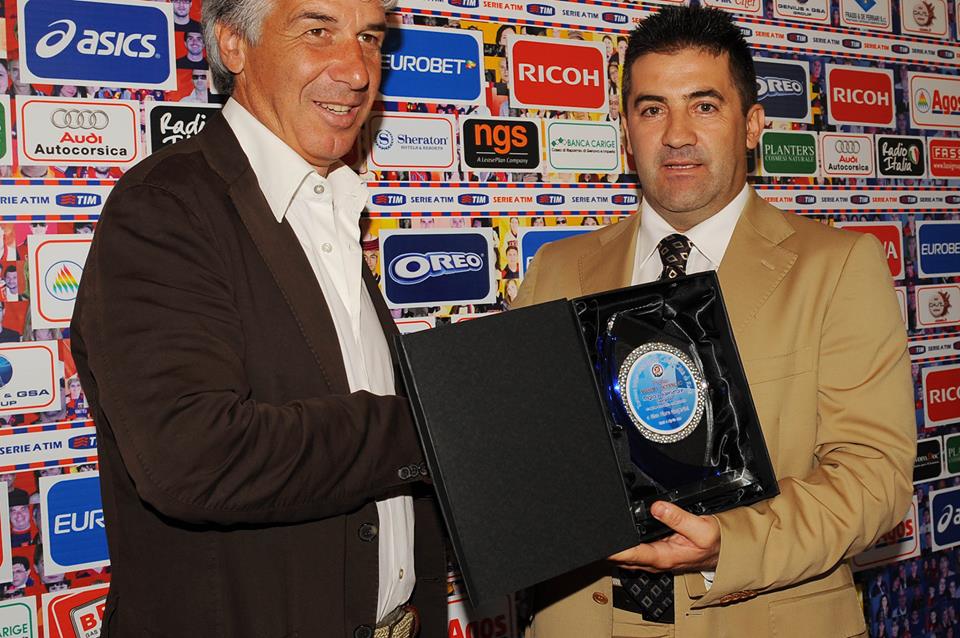 Reason: The award for best technical Manlio Scopigno Serie A 2009 goes to Mr. Gian Piero Gasperini who reported after 18 years Genoa in European football, with a brilliant game and spectacular. This championship has highlighted the qualities not only technical but also human to a coach who has been working well for years, first in the youth sector of Juventus, where he forged many future champions (Giovinco, De Ceglie, Marchisio, Sculli, Criscito etc. ), then Crotone and Genoa. The hope is that this award is a stepping stone to success even more prestigious for him and for Genoa CFC’s Chairman. Enrico Preziosi. 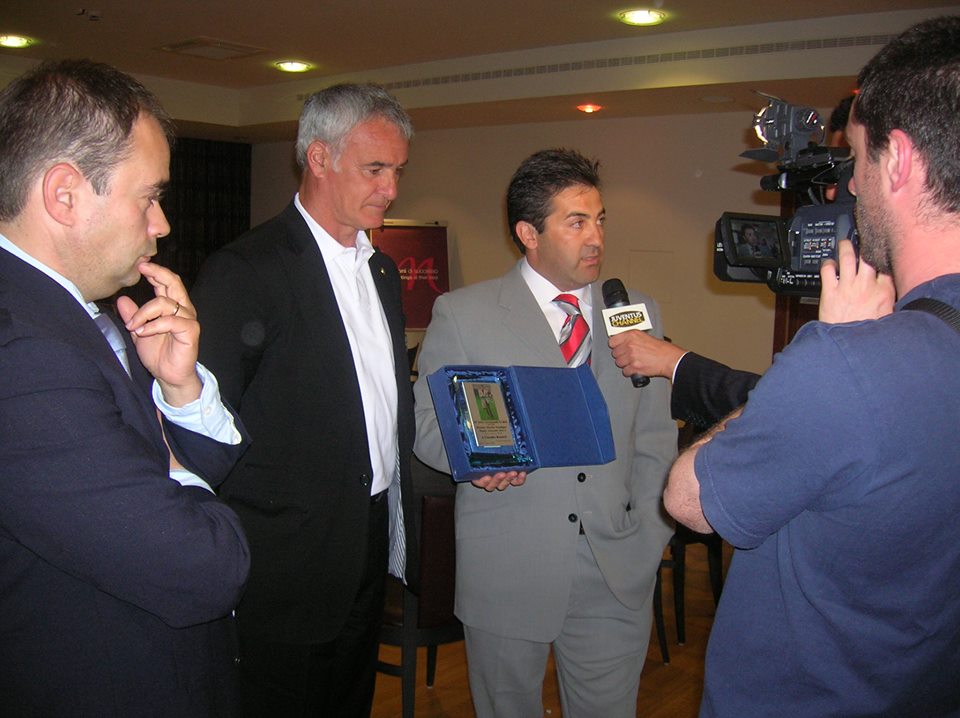 Reason: A distant November 4, 1973, a young defender hopefuls made his debut in Serie A with the shirt of Rome. It was Claudio Ranieri, who made his debut with the jersey of Roma against Genoa at the Marassi. On the bench sat Capitoline Manlio Scopigno he had glimpsed in that boy nice and polite the qualities of good defender. It is good to see that, after 35 years on the streets of Scopigno and Rainier meet with the prize dedicated to technical Rieti. Ranieri deserves recognition for reporting, in the shortest possible time, the Juventus football that belongs to her and to have it done in the way that everyone, fans and experts, have appreciated in recent years: with skill and elegance. Were many of the steps and the many brilliant insights that coach of Juventus has given the tournament: all, moving Chiellini in central defense. Extraordinary also the ability of the technician to be able to work with both samples with young people and also the soldiers. The award Scopigno, however, in addition to sports results also requires the uncommon qualities: those of sportsmanship and of abstaining from any type of controversy free. Again, Ranieri stood out, keeping a distance, as his style, from any discussion even when circumstances might require. 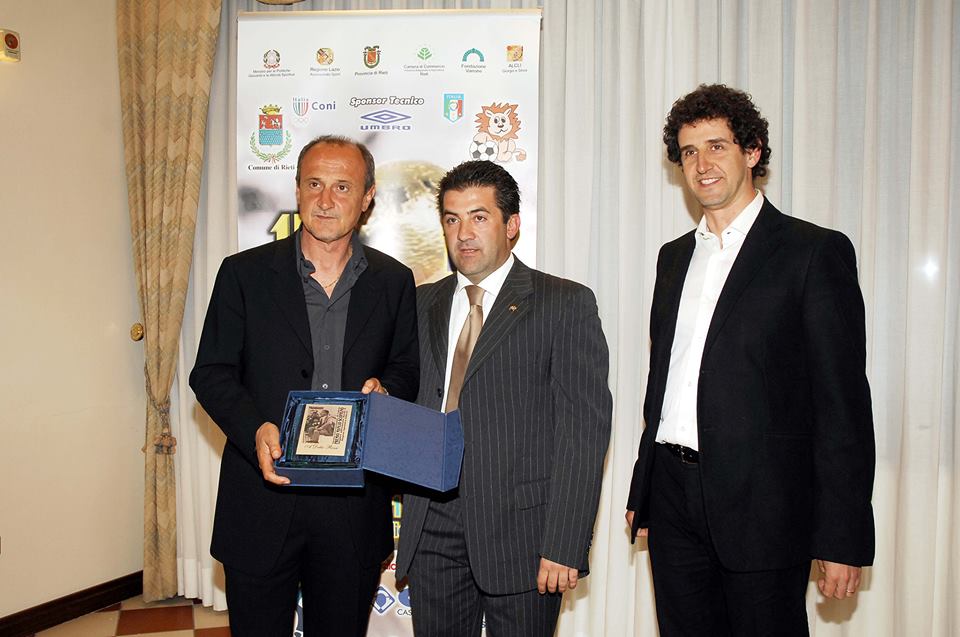 Reason: The choice for the tournament series A fell on Delio Rossi, who coach in the last championships has achieved great results in all categories. The pride of the coach from Romagna were brilliant championships with Salernitana and Lecce, which was followed by the actual consecration with SS Lazio, with whom he has equaled and surpassed two giants of history-white as Thomas and Sven Goran Eriksson Maestrelli. Our hope is that this award will serve as a springboard for a career even more brilliant and successful. 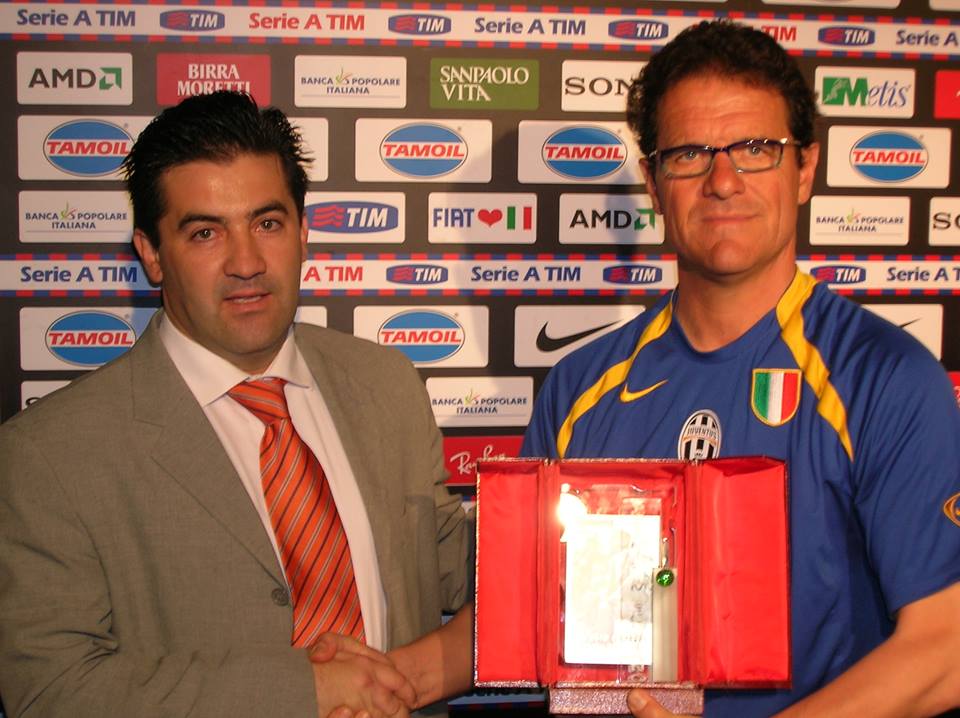 Reason: The prize Manlio Scopigno the best coach for the 2005-06 football season in Serie A is assigned to Mr. Fabio Capello, Juventus coach. Mr. Capello needs no introduction. We are talking about a living legend of world football, first as a player and then as a coach. A player has been an example of intelligence and clever tactics. Its historic goal at Wembley allowed the Italian national storm for the first time the temple of English football. As a coach he won everything, succeeding in winning title after title in four different companies (AC Milan, Real Madrid, Roma and Juventus). Capello is the best representative of the Italian school of coaches and is a worthy heir to the likes Well, Viani, Rocco, Bearzot and Trapattoni. Like many other great coaches it is also Friulian (remember that Manlius was born in Friuli), a trademark and quality for those sitting on the bench. 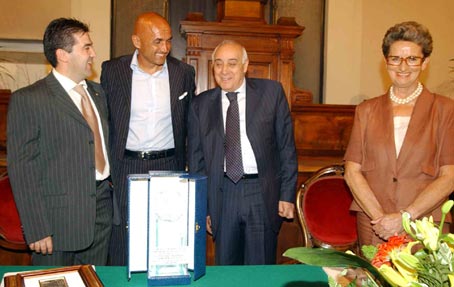 Reason: The jury of sports journalists nationwide chaired by writer and journalist GIULIO OK, confers on Mr. Luciano Spalletti due recognition for an exciting season at the helm of Udinese, ended with a historic qualification to the UEFA Champions League. It is also an award for the young but intense career of technical Toscano A career full of sensational results as promotions from C to A Empoli in past seasons. And as’ known, however, ‘the prize Manlio Scopigno is awarded not only to those who are’ a great coach. Skills needed to get it are the ones who made famous the good Manlio during his sporting life. Let’s talk about those human qualities that bring out the Mr Spalletti as one. Coaches Italian more ‘prepared at the technical and tactical, but, above all, one of the most’ educated, noble, capable with a gesture, a word or a smile to dampen those tones often unnecessarily turned on the national football. 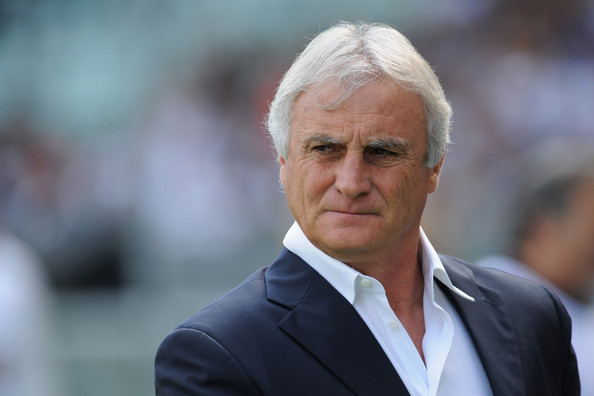 Reason: The prize for this season is to Giuseppe Papadopulo for prestigious achieved as head of Siena. Having led for the first time in its history the Tuscan club to Serie A, he was able to get even a salvation that is unbelievable. The prize is also intended to Papadopulo his career, built in the underworld of the minor leagues, climbing without any help but only with the help of his strength and his consistency. 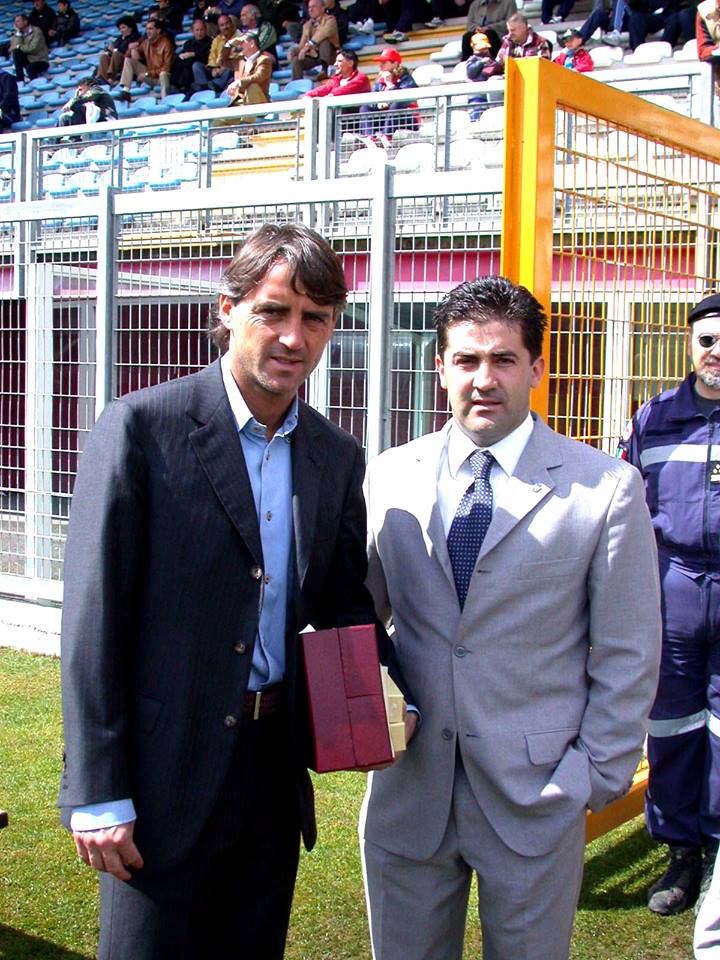 Reason: Apparently than Scopigno, actually the coach of Lazio has much in common with our illustrious countryman. He, like Manlius, prefers dialogue with the dressing room trying not ever clash. He knows, Mancini, who act as sergeant iron is useless. With the players you have to speak, understand and enter into their problems. The dialogue, first of all, the exchange of views, the comparison, the continuous research, make Mancini one of the most open-minded coaches in our league.
Mancini also has a vision of football like Scopigno. I never miss the beautiful game and the use of elements that give the ball to you. His team is full of virtuosos of the ball as it was Cagliari in 1970. Everyone, even the defenders, try to actively participate in the game. This makes New York one of the most beautiful team to see the tournament. One of the few who always tries to play the ball.
Despite being a young technician, Mancini is already a great coach. In less than three years she has won an Italian Cup with Fiorentina, and is bringing, against the predictions of the specialized press, Lazio in the Champions League. One l¹esperienza negative, that of Fiorentina last year. But it was a situation so desperate that no one could have done better. Indeed, Mancini came out like a lord without controversy, with the class that has always marked also as a player. And that player! A sample with a capital C, for sure one of the biggest post-war. We ‘also why we are proud to have our guest and to start with a name as prestigious history of this award. We wish to repeat on the bench had an extraordinary career as a player.