A dense day of sport that will culminate at 15.30 with the inaugural match between F.C. Inter and S.S. Lazio at the Paride Tilesi stadium in Amatrice (broadcast live on RAI Sport.

“We will have guests the FIGC President Gabriele Gravina and the godmother of this year’s tournament, Greta Beccaglia – announced the ASD Scopigno President Fabrizio Formichetti – Diego Armando Maradona Jr. will also be present in Amatrice”.

Today the Brazilians of Fluminense have already arrived in Rieti, fresh winners of two tournaments, in Switzerland the Geneva Cup and in Holland the Heemskerk Cup, ready to compete with the other teams and try the trio at Scopigno.

On the website (https://www.scopignocuprieti.com) and on social media (Facebook, Instagram, Twitter, You Tube) the program of the races is online, which will involve five cities (Rieti, Amatrice, Rome, Naples, Terni and Cittareale). All races will be streamed on social networks and on the website. 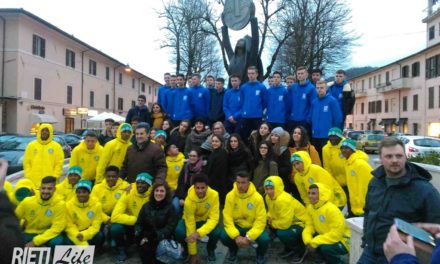